Home / News / The Solheim Cup – The Biggest Event In Women’s Golf – Everything You Need To Know!

The Solheim Cup – The Biggest Event In Women’s Golf - Everything You Need To Know! 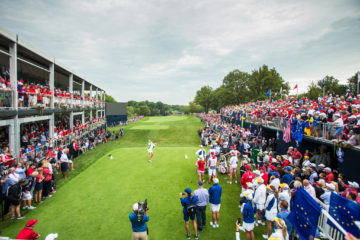 The most exciting competition in women’s golf, The Solheim Cup, is returning this year from the 9th – 15th  September at the world-renowned Scottish golf course, The Gleneagles Hotel.

Named after the Norwegian-American golf club designer Karsten Solheim, also known as the founder of PING. Karsten was the driving force behind the competition with the inaugural event being held in 1990 in Florida and won by Team USA. Ever since then The Solheim Cup has been played every 2 years (apart from the reshuffle between 2002 and 2003) alternating between courses in Europe and the USA.

The Solheim Cup is a match-play competition between Team Europe and Team USA, comprising some of the best female golfers in the world. Team USA has won the last two editions and 10 times overall, versus Europe’s five wins in total.

This year marks six years since Team Europe last won the competition and they will be hoping the ‘home’ advantage will play its part in helping them close the gap on their rivals.

The format is modelled on that of The Ryder Cup and will be played over three days (13th, 14th, 15th September), with the first two days being played as foursome matches in the morning and fourball matches in the afternoon and the final day being a singles match format.

Each team is made up of 12 players along with the team captain and three assistant captains, however, the captains will not actually play during the competition. Both captains are usually professional golfers with Solheim Cup playing experience and chosen for their ability to lead a team.

This year will see Team Europe being captained for the first time by Catriona Matthew, who herself has represented Europe on nine occasions as a player, amassing a total of 22 points.. Team USA is led for a record third consecutive time by Juli Inkster. Inkster has also played in nine Solheim Cups, amassing 18.5 points overall and has won seven major titles throughout her illustrious career.

The qualification process for players to make the final cut differs for each team. Qualification for the 2019 event began as soon as the 2017 competition finished and the European team will announce their final names on the 12th August, the day after the Aberdeen Scottish Investment Ladies Scottish Open finishes. Team USA has not yet announced when they will choose their team, however, the final event to earn qualification will be the CP Canadian Women’s Open 25th August 2019.

The criteria to be selected for the European team are as follows:

The criteria to be selected for the USA team are as follows:

Competition for spaces on either team are still up for grabs and a late surge in form can push lower ranked players into contention, especially when the captains come to choose their picks.

This year’s competition aims to be the biggest in history and it will certainly be the most hotly anticipated in years, with Team Europe hoping to make amends for their 2017 loss to the Americans in Des Moines.

The competition will be held at the prestigious Gleneagles Hotel in Scotland and will be played on the PGA Centenary Course. This par-72 layout was designed by the great Jack Nicklaus who described it as ‘the finest parcel of land in the world I’ve ever been given to work with’. By hosting The 2019 Solheim Cup, Gleneagles will make history by becoming the first European course to stage both The Ryder Cup and Solheim Cup.

This year’s event hopes to break records in terms of attendance and attract 100,000 spectators to Gleneagles. Tickets can be purchased via the official website (https://www.solheimcup2019.com/tickets) and Authorised Tour Operators.

Along with the main event, spectators will also be able to attend and enjoy watching the PING Junior Solheim Cup, practice days and the Opening Ceremony Day which is packed full of fun for all the family, featuring entertainment and live music.

For those unable to find a ticket for this great occasion, the Solheim Cup will be broadcast globally via various different sports channel networks. Here in the UK and Ireland, Sky Sports are covering all the action so you will never miss a shot.

As The Solheim Cup’s official golf buggy suppliers, Carryway will be responsible for the delivery, coordination and support activities related to the supply of over 200 Club Car golf and utility vehicles. Our vehicles will be tasked with ensuring teams such as the security, medical support, media and TV crews, along with course marshals and scorers have the transport solutions they need on site.

As well as keeping the wheels turning for the people behind the cameras, we will be keeping the teams moving in front of them too. Fourteen team buggies for players and caddies, including the two captains’ cars, will be provided by Carryway and wrapped in European and American colours and hopefully become part of the iconic images from this year’s competition.

At Carryway we are immensely proud to be an official supplier to The Solheim Cup 2019, which will be our biggest event of the year. Keep up to date with how preparations are going through via our social media channels and news section.

For tickets to the greatest event in women’s golf, follow the link below: